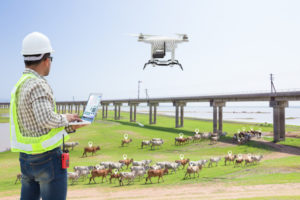 Automation is rapidly changing our world. The promise of the Internet of Things (IoT) is being applied across an ever-broadening cross-section of the economy. And it’s not science fiction!

IoT is all about how computing technology is being applied to everyday devices in order to transmit and receive data. Such is the pace of change in this space that many of the most recent applications receive little fanfare outside of the industrial or business press.

Did you know that in Australia, Sydney rail passengers can now use an app to check the capacity of an approaching train? They can even see which carriage has the most room. The most fascinating aspect of this story is the back end of the technology which does not, as you might expect, involve a process of counting tickets at passenger entry and exit points. Rather, each carriage is weighed as it approaches a station, capacity is estimated and then that data is transmitted to the app in real time.

Outside of the city, the dairy industry is being turned on its head by robots which allow cows to come and be milked when they want. What’s known as Precision Dairy Technology or Automatic Milking Systems has an obvious benefit in terms of reduced labour requirements. However the real change is in productivity with real time data allowing farmers to better plan their days with some experiencing increases in output of up to 25%.

Curiously fixed time points for agriculture have been one of the sticking points in the debate over daylight savings in Queensland, Australia. With cows able to choose when they want to be milked, could these 21st century farm robots be the catalyst for a single east coast time zone?

Further west, Australia’s vast outback stations are tracking their disparate herds with the latest in drone technology. These ‘flying cowboy’ robots are quicker, easier and less prone to accidents than the real thing. In days gone by a Jackeroo on horseback might have been the preferred method for monitoring stock movements but electronic tagging combined with GPS is allowing graziers to know the real-time precise location of every asset on their property.

Tolerro is paying close attention to the rapid roll-out of the IoT technologies. With Facilities Management an ever-increasing aspect of our work portfolio, we are seeing industries transformed before our eyes as clients begin to appreciate the incredible amount of data at their fingertips and the efficiencies gained through the application of automated and integrated systems.

We can only begin to imagine what incredible life-changing applications lie ahead as Artificial Intelligence and the Internet of Things technologies continue its rapid move from theoretical science fiction to real world innovation.